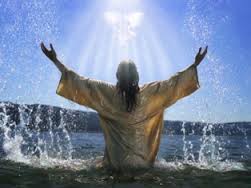 What does the Bible say about baptism, and why is it so important?

There has been a trend in modern Christianity which has begun to place little value on baptism, and treat it as an optional token, rather than a vital step in the faith, teaching that baptism is only symbolic and that it has no other purpose. They claim that baptism is simply an outward expression of an inward act, and in many cases, the “altar call” has come to replace the baptismal in the life of new believers. However, if baptism is only symbolic, then why did YAHUSHA command that all believers become baptized?

“Go therefore and make disciples of all the nations, baptizing them in the name of the Father and of the Son and of the Holy Spirit, teaching them to observe all things that I have commanded you…”
Matthew 28:19-20

Why would our Messiah place so much emphasis on baptism if it was only symbolic? He placed it on equal ground with making disciples and teaching them to obey all of His commandments. He also linked baptism to salvation, saying,

“Go into all the world and preach the gospel to every creature. He who believes and is baptized will be saved, but he who does not believe will be condemned.”
Mark 16:15-16

When did baptism originate, and what is its purpose? We know that John was baptizing people in the Jordan for repentance of sins, but was he the first to introduce baptism?

If we do a little research, we find a connection between baptism and the practice of ablution, the act of washing oneself in water as prescribed by YAH in the Torah.

There are three kinds of ablution recognized in Biblical and rabbinical law: (1) Washing of the hands, (2) washing of the hands and feet, and (3) immersion of the whole body in water. These ablutions are often referred to as “ritual washings”, and the two most common are that of hand washing and full body immersion.

The Scripture provides a number of scenarios for when we should wash in water. It serves to decontaminate from sickness and disease, to purify from touching unclean things, to sanitize from emissions and menstruations, and to sanctify before entering the temple.

John Wesley popularized the phrase, “Cleanliness is indeed next to godliness”, and although that phrase is not found in the Scriptures, the concept can be inferred from the sheer number of times the Bible instructs us to wash.

“The Baptism of the proselyte has for its purpose his cleansing from the impurity of idolatry and the restoration to the purity of a new-born man… The bathing in the water is to constitute a rebirth, wherefore ‘the ger is like a child just born’ and he must bathe ‘in the name of YAH’ — ‘leshem shamayim’ — that is, assume the yoke of YAH’s kingdom imposed upon him by the one who leads him to Baptism, or else he is not admitted into Judaism. For this very reason, the Israelites before the acceptance of the Law had, according to Philo on the Decalogue, as well as according to rabbinical tradition, to undergo the rite of baptismal purification…”
Singer, Isidore, Ph.D, Projector and Managing Editor. Entry for ‘Baptism’. 1901 The Jewish Encyclopedia.

This is very similar to what Sha’ul wrote about those who passed through the red sea after leaving Egypt.

The phrase “baptized into Moses” is a reference to Moses being the one who led them in their baptism, and it was under Moses that they assumed “the yoke of YAH’s kingdom”. This would mean that if we are baptized in YAHUSHA, then we assume the yoke of the covenant through Him because He is the one who leads us into the kingdom.

There are a number of types and shadows of baptism in the Scriptures such as Noah and the flood, Moses in the Nile, the Israelites crossing the Red Sea, and Jonah in the belly of the whale. Not only do these events represent baptism, but also point prophetically to the resurrection. Each of these accounts shows how people were redeemed from death through the water.

Peter made a direct correlation between baptism and the resurrection. He also used the flood as an example of baptism, explaining how Noah and his family were saved through water.

“…when once the Divine longsuffering waited in the days of Noah, while the ark was being prepared, in which a few, that is, eight souls, were saved through water. There is also an antitype which now saves us – baptism (not the removal of the filth of the flesh, but the answer of a good conscience toward YAH), through the resurrection of YAHUSHA HAMASHIACH,”
1Peter 3:21

Just as the flood purified the earth, so also baptism purifies the soul. Baptism is the cleansing of a person from impurity and idolatry.

Peter said baptism is an “antitype” of the flood. The Greek word he used here is ἀντίτυπον (antitypon) which means typical of, representing by type or pattern, corresponding to, a thing resembling another, or its counterpart. It refers to another thing that is similar to the first.

Therefore, baptism is a type or pattern of the flood which saved Noah and his family. The flood cleansed the world of evil and allowed Noah and his family to start over fresh. The whole earth was baptized in water, which is symbolic of resurrection because new life came forth from the ark.

“What shall we say then? Shall we continue in sin that grace may abound? Certainly not! How shall we who died to sin live any longer in it? Or do you not know that as many of us as were baptized into YAHUSHA HAMASHIACH were baptized into His death? Therefore we were buried with Him through baptism into death, that just as HAMASHIACH was raised from the dead by the glory of the Father, even so, we also should walk in newness of life. For if we have been united together in the likeness of His death, certainly we also shall be in the likeness of His resurrection, knowing this, that our old man was crucified with Him, that the body of sin might be done away with, that we should no longer be slaves of sin. For he who has died has been freed from sin. Now if we died with HAMASHIACH, we believe that we shall also live with Him”
Romans 6:1-8

Peter compelled the people to be baptized during his sermon, teaching baptism for the remission of sins.

“Now when they heard this, they were cut to the heart, and said to Peter and the rest of the apostles, “Men and brethren, what shall we do?” Then Peter said to them, “Repent, and let everyone of you be baptized in the name of YAHUSHA HAMASHIACH for the remission of sins; and you shall receive the gift of the Holy Spirit… Then those who gladly received his word were baptized, and that day about three thousand souls were added to them.”
Acts 2:37-41

It is no wonder that we see the Apostles placing such emphasis on baptism among new believers. Here are a few examples from the book of Acts that show how important it was to the First Century believers.

“But when they believed Philip as he preached the things concerning the kingdom of YAH and the name of YAHUSHA HAMASHIACH, both men and women were baptized.”
Acts 8:12

“Then Philip opened his mouth, and beginning at this Scripture, preached YAHUSHA to him. Now as they went down the road, they came to some water. And the eunuch said, “See, here is water. What hinders me from being baptized?” Then Philip said, “If you believe with all your heart, you may.” And he answered and said, “I believe that YAHUSHA HAMASHIACH is the Son of YAHUAH.” So he commanded the chariot to stand still. And both Philip and the eunuch went down into the water, and he baptized him.”
Acts 8:35-38

Even Paul was compelled to be baptized when he became a believer.

“And Ananias went his way and entered the house; and laying his hands on him he said, “Brother Saul, the ADONAI YAHUSHA, who appeared to you on the road as you came, has sent me that you may receive your sight and be filled with the Holy Spirit.” Immediately there fell from his eyes something like scales, and he received his sight at once; and he arose and was baptized.”
Acts 9:17-18

“…he stood and said to me, ‘Brother Sha’ul, receive your sight.’ And at that same hour, I looked up at him. Then he said, ‘YAHUAH of our fathers has chosen you that you should know His will, and see the Just One, and hear the voice of His mouth. For you will be His witness to all men of what you have seen and heard. And now why are you waiting? Arise and be baptized, and wash away your sins, calling on the name of the YAHUAH.’”
Acts 22:13-16

Notice that baptism was done immediately after coming to faith. They didn’t have an “altar call” or take a new members class, they believed and were baptized. There was a sense of urgency connected to each of these baptism accounts because they understood baptism to be a vital part of their salvation.

Baptism marks the death of our sinful ways, giving us a newness of life through the Spirit, because,

“Most assuredly, I say to you, unless one is born of water and the Spirit, he cannot enter the kingdom of YAHUAH.”
John 3:5

If we want to enter the Kingdom and have eternal life, then we must put our sinful flesh to death, and live our life according to the Spirit, walking in obedience to the Word of YAH.

“Repent, and everyone of you be baptized in the name of YAHUSHA HAMASHIACH for the remission of sins; and you shall receive the gift of the Holy Spirit.”
Acts 2:38

In many churches it is popular to have an “altar call” for people who want to convert and be saved, but the scripture places emphasis on baptism for conversion, salvation, and for the remission of sins. The scripture never mentions an “altar call”, Peter didn’t ask people to “raise their hands and pray a prayer”, the apostles always compelled the new believers to immediately get baptized.

I have one final verse for those who don’t think baptism is important.

“the Pharisees and lawyers rejected the will of YAH for themselves, not having been baptized by him.”
Luke 7:30

I hope this teaching has helped you better understand the importance of baptism. And if you have not been baptized, then what are you waiting for?

And I recommend baptism by being fully immersed in the water.